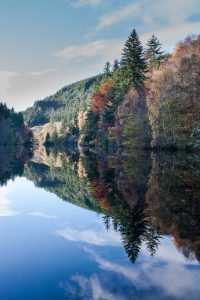 It wasnt long however before I put down the paddle and reached again for the camera. The narrow wooded pool that I had put in to soon opened out, giving a wider context of mixed woodland on either side of the river. In the middle distance, the river narrowed again by a craggy outcrop, and conifers crowded down to the water’s edge.
Maybe I’d paddled further than I thought – it looked like I had landed in Canada!