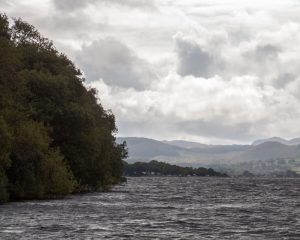 My last day in Denbighshire, and I had a choice of paddling the Llangollen Canal or heading up to Llyn Tegid for a spot of open water. Either way it would be solo with the dog, and the prospect of fighting my way through badly driven hire boats didn’t appeal much.
So Llyn Tegid it was, and that gave me an excuse (as if one were needed), to see how the cronje behaved in windy weather on a lake.
The forecast was for winds just about reaching force 3, but when I got to the launch point by the cafe, the wind was more like a steady force 4. A short, sharp-edged chop was blowing down the length of the lake, with wind alleys running parallel to the shores. White horses swept along the middle.
Still, I was here, and I was going to paddle. It would just be a sterner test than I had planned for, especially as my only ballast to assist with trim was the dog. He’s heavy enough at 45kg, but doesn’t necessarily stay where I want him…
Launching from the slight shelter offered near the jetties, I decided to tack upwind rather than try to fight straight up the lake.
This was the first time I had had this boat out in a strong wind, and it handled it well. Relatively ightly loaded it did make some leeway, but held its angle to the wind rather than weathercocking. Holding what in sailing terms was a close haul, the boat met the waves well, with only the occasional splash coming over the gunnel. Reaching the south bank, I hid briefly in the lee of some trees, snapped a quick shot into the wind, then set off on a port tack to reach some of the sailing bouys.