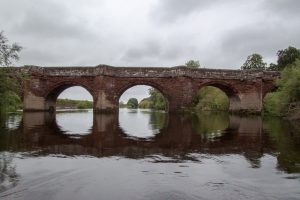 The bridge across the river also crosses the border between `England and Wales. Built in 1399 by monks from St Werburgh’s Abbey in Chester it used to carry a toll, and have a gate tower in the middle.
An important crossing point on the Dee, it was also the scene of civil war battles, and reputedly, the drowning of two sons of a welsh prince who are now supposed to haunt the area.
None of that drama was evident today however. A grey overcast blanketed the sky and even though it was quite warm, gentle drizzle fell.