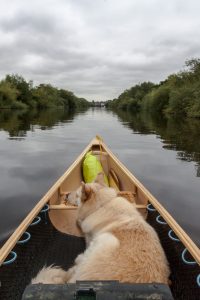 The A55 passes overhead soon after the Crook of Dee, and for a short while traffic noise intrudes on the quiet of the river. But before long that too gets left behind, and the Mile Straight brings the first views of Chester. I was glad there was almost no wind today. The current, that has been pushing me along nicely further upstream, had now died away to almost nothing, dammed back by Chester Weir, and the straight channel would make a formidable wind tunnel should the wind blow against you.
I began to see a few watercraft on the water now, single sculls from the many rowing clubs closer to the city centre.