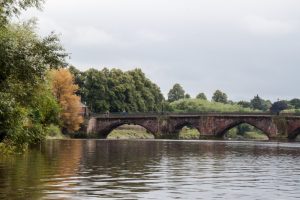 The Old Dee Bridge crosses the river by the weir. The weir itself dates back to the 11th century, and there has been a river crossing here since Roman times, but the existing bridge mostly dates from the 14th century. From the look of the differing arches it has been built and rebuilt many times over its long life.
The weir marked my downstream limit. I turned around here, and travelled a short distance against the flow to one of the riverside pubs to complete my journey with some well -earned refreshment.