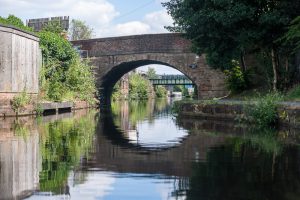 I have intended to paddle the Sheffield and Tinsley canal for years, but despite it being quite near home, somehow I have never got round to it. Until this trip, that is. A school summer holiday meant filling some days with activity, so my youngest son and I decided that as we were going into Sheffield to drop his sibling at a sporting session, we would continue into the heart of the city and explore the waterways.
Dropping into the canal just at the entrance to Victoria Quay was easy – good parking right by the canal, and a short carry through a narrow entrance onto the towpath. The entrance to the Quay itself was barred by a footbridge too low even for a canoe to sneak under, so we left the terminus unvisited, and headed east into the industrial heartland of the Steel City.
The canal was built to bring Yorkshire keels – barges of 61′ by 15’6″ – from the River Don into the city, and rises up to its top pound via the Tinsley flight of locks. We aimed to traverse the top pound to the locks and back, a round trip of 8km, through Attercliffe. There are still some foundries in that area, and an accumulation of small industrial sites along the canal, so the scenery was quite different to my usual trips.
Being right in an urban centre meant many bridges as well, some dating from the canals construction nearly 200 years ago, others much more modern, from developments like the renewed Sheffield supertram network.