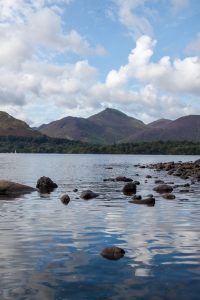 For a bit of variety, we went inshore of Lord’s Isle, and on an impulse decided to land. I have never set foot here before, though I knew there had been a Manor House on the island once.
Under the tree cover, we found the remains of quite substantial earthworks, with a ditch and earthen wall easily visible. At the north end, the foundations of stone walls could still be seen. The Earls of Derwentwater built a manor house on the island in the fourteen hundreds, which was protected by a causeway and drawbridge, but it fell into disrepair and the stones were robbed to build the Moot Hall in Keswick, now the tourist information centre. The last earl backed the wrong side in the Jacobite rebellion, and was beheaded in 1716, after losing at the battle of Preston.
We found all this out later with a spot of googling. For the minute, we enjoyed some ill-informed speculation as we wandered round. Returning to the boat, I enjoyed the view across to Causey Pike.