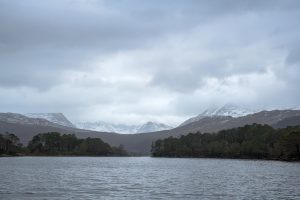 One legend that stuck in my mind on Isle Maree was that a visitor should make sure they took nothing from the island when leaving, or an ill fate would pursue them. Apparently the boatmen who ran trips to the island would even rinse the gravel from their boots before reboarding their vessels. Accordingly I too made sure that all I left with was what I had brought – paddling solo in such a vast landscape decided me against temptimg fate!
The wind had increased again during my stop, and was blowing fairly briskly westward now. I decided to use it to my advantage, and made a quick passage down the outside of the islands, heading for the strait between Eilean Ruaridh Mor and Garbh Eilean. I was tempted several times to explore the small waterways around the islands on the outside of the archipelago, but at the same time was a little concerned that I might get caught that side by high winds as a cloud bank built on the horizon.
Reaching the gap between the major islands, I paused briefly to enjoy the view towards Beinn Eighe, truncated as the mountain was by cloud, then continued west.