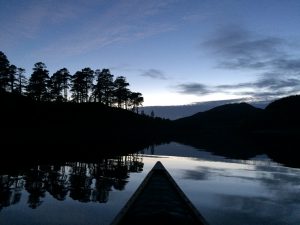 The calm conditions continued into the night, but as I worked my way up the loch, I found my progress far slower than I expected. Working harder gained me ground, but the I started to feel the hull moving under me – not what I expected on calm flat water.
A few boils appeared either side of the boat, accompanied by the noise of a cascade entering the loch. With water levels so low, the water authority were refilling the reservoir from a sluiced side stream. In full daylight this wouldnt have been a problem, but it was an unwelcome surprise in near-dark!
Pulling over to the far bank to avoid the disturbance, I was soon passed the stream and approaching the upper loch. Twilight had been and gone, and I was now paddling under moonlight shadows.