Not that long ago I wrecked my Swift Raven, leaving a gap on the boat rack that nagged at me to be filled. This coincided with Covid-19 effectively preventing any possibility of a Spring or most likely Summer holiday away. Feeling a bit restless as a result, and with some money burning a hole in my pocket, I was tempted to look at a new boat.

Now my wife will tell me (and indeed has on a number of occasions) that I already have enough boats, and surely, they can’t all be that different to one and other. But I had a hankering after a boat that was definitely different to my other boats – it had a deck for starters…

I had been toying with the idea of trying a sea kayak for quite a while. I love open boats and have paddled them almost exclusively for the last six or seven years but started my paddling life in kayaks on the sea. I have had to change plans for a number of trips because of adverse forecasts over the years, and the greater seaworthiness of a sea kayak would make this less of an issue even allowing for the large safety margin I give myself as a habitual solo traveller.

My eye had been caught by an ex-demo seabird scott for sale at half-price from Manchester Canoes, and I arranged to view it just days before we all went into lock-down. The scott was a lovely comfortable boat, well-thought out and a good size. But unfortunately, the damage repair behind the skeg box they had advised me of was more extensive than the photos suggested with an additional hole in the back deck that they hadn’t spotted or repaired, and a large repair to the box itself evident from inside the hatch. I decided this boat had been subjected to a much bigger impact than I was prepared to accept so somewhat regretfully turned it down. But having driven out with the intent of buying a boat, I decided to check out their other sea kayaks. Sadly, my budget wouldn’t stretch to a new composite boat, but they did have a sale on, trying to move stock while they still could.

A number of different boats nearly suited me, but the best fit was a valley etain 17’7 – a bigger boat than I thought I needed. The built quality of the valley boats was noticeably better than other plastic hulls, with rigid plastic bulkheads welded in place rather than glued foam ones. Deck fittings and hatches also felt stronger and better positioned. I hadn’t initially wanted such a long boat; the benefit of going to a shop with a decent range is you can try out the fit of several different boats side by side.

20% off brought it into my price range as well and let me buy a nice shiny new paddle to go with it as well.

So, in the current climate, I could only justify a trip to my local reservoir – Underbank. The weather was lovely – warm and sunny, but with a stead force 2-3 north easterly blowing up over the dam. Despite its length the boat is reasonably easy to load on and off the pick-up roof, and with the water levels being high, I could park right by the edge and just swing the boat down.

I had tested the fit on dry land, and the cockpit felt comfortable afloat. I had expected the boat to feel quite tippy with a V-hull but was pleasantly surprised. It felt steadier than my apache 14, but with good secondary stability too. It has been a long time since I last sat in a sea kayak, and I was again surprised at how mobile this long hull was when heeled over. It took a little while to adjust to leaning to the outside of the turn but before too long muscle memory reasserted itself.

Online reviews of most sea kayaks seem to make a big thing about weather cocking. I had noticed the stern rocker seemed much greater than the bow and was expecting the stern to swing a lot more than it did. I guess that could be a bigger problem in stronger winds, but deploying the skeg, easily done with a positive-feeling slider below the cockpit rim, immediately locked the course regardless of the angle to the wind.

I set off upwind, and quickly got the feel of the balance of the boat. Within a few minutes I felt comfortable enough to take out my phone for some photography.

Turning westward, downwind for a change to the head of the reservoir, the view opened up, with a big sky above.

The thickets along the bank were flooded, and just coming into bud, and it was a quick passage to the narrows where the River Porter enters.

This end of the reservoir usually floods in the winter, so with care you can thread a maze of reeded shallows and sometimes reach the bridge at the very top.

I didn’t get that far in this boat but was pleased with how manoeuvrable such a long boat was in confined spaced.  Once back out in the open, I made a few test traverses at different angles to the wind, with and without the skeg down. Obviously, this was a limited test in calm waters, but I was pleased with my purchase. As lockdown continues, I don’t know when I will be able to take it out where it belongs, but there’s something to look forward to. 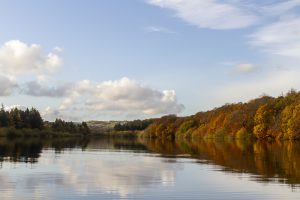 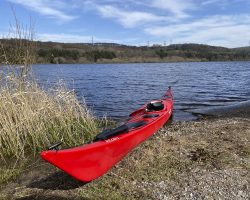 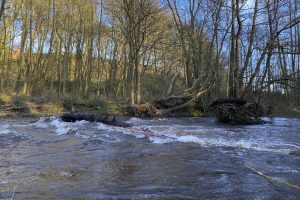