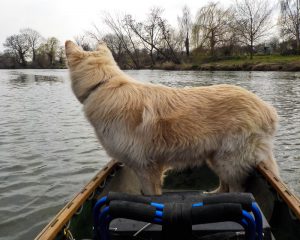 Heading downstream from the first weir, the banks of the river were still quite managed, although the flow helped us along nicely after the still waters of the canal. The dog was on the alert for avian hazards, barking to ward them off before the came to close – at least I suspect that would be what he would tell me if he could. I wouldn’t believe it though, I think he just does it for devilment!